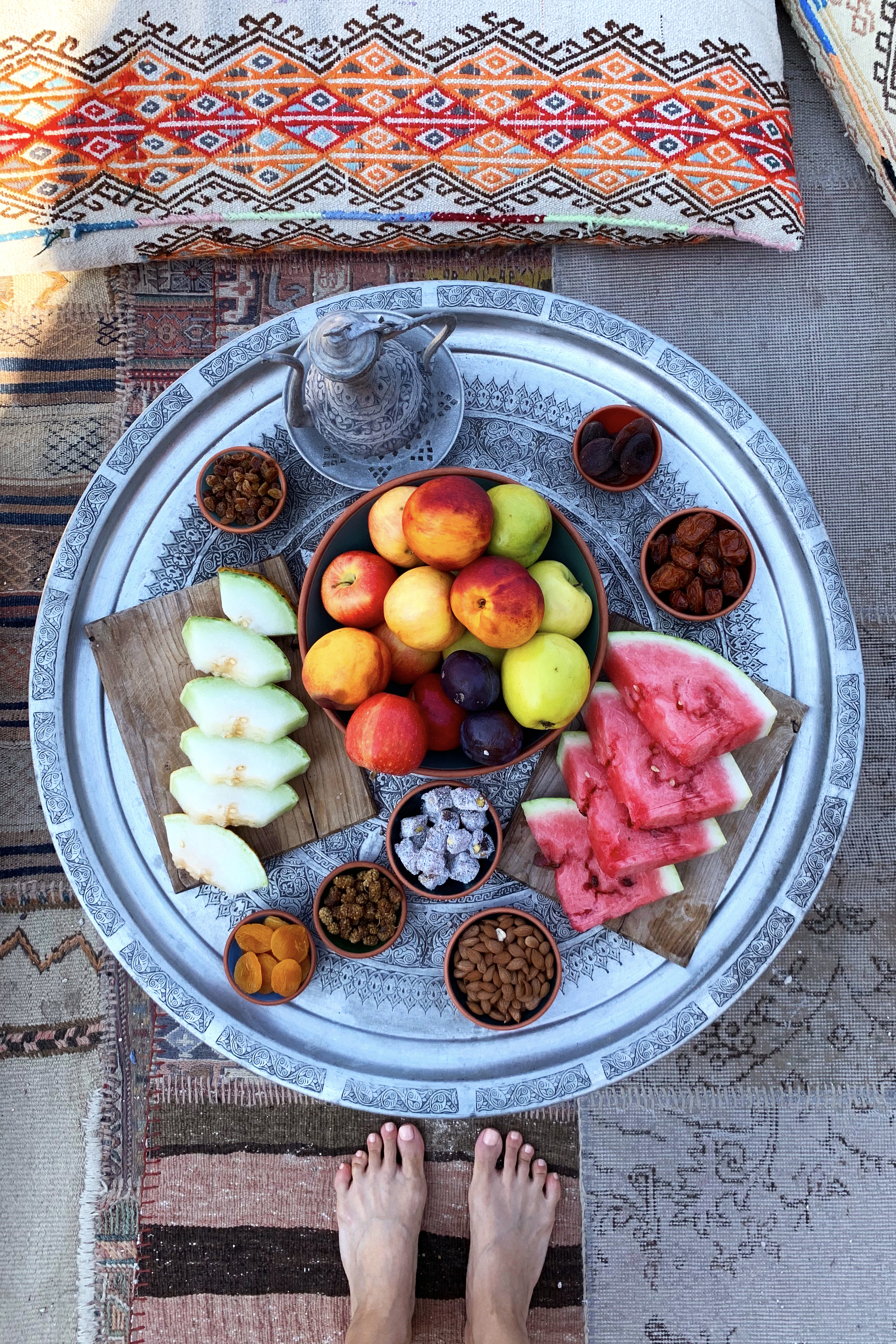 Saying my expectation for Turkey was extremely high would be an understatement. I don’t think I had ever been that excited before holiday, even though I had been to many incredible places in the past. And thankfully, Turkey had exceeded my expectations by far. From the stunning natural beauty of Cappadocia to the rich history and culture of exotic Istanbul, the country had everything I wanted. 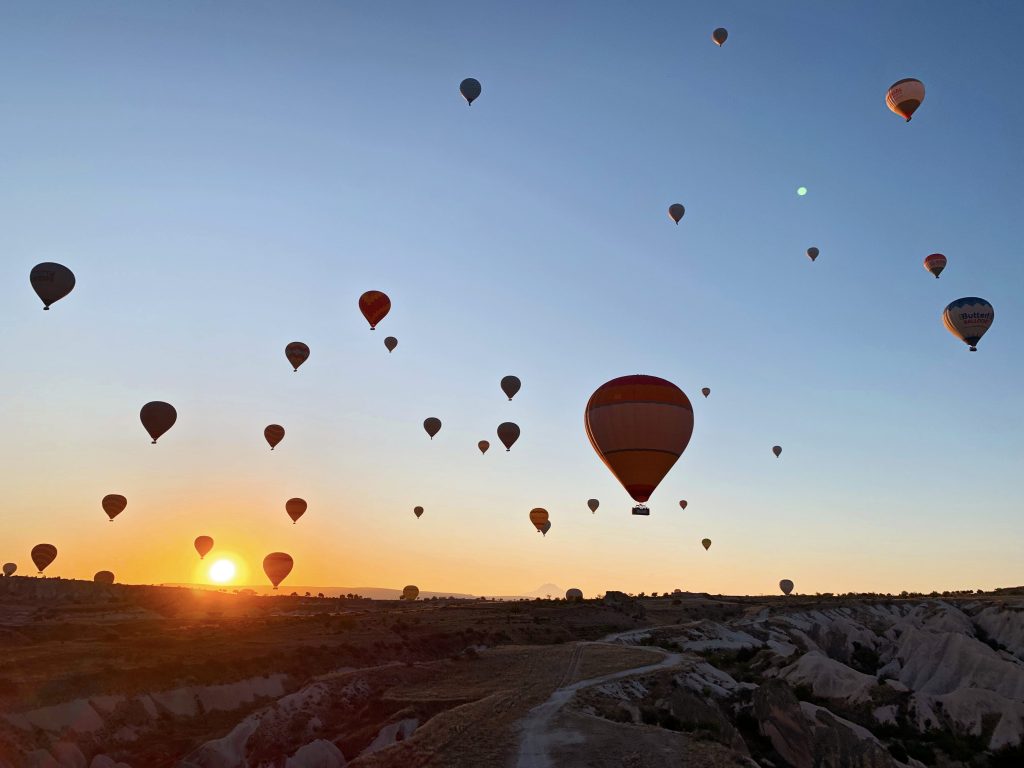 Watching sunrise in a hot air balloon in Cappadocia was a dream. I had to wake up at 4am (I am more like staying up till 4am rather than waking up at 4am person) but it was all worth it. It was one of the most magical experiences I have ever had, and I would go back and do it again in a heartbeat, maybe even in cold winter with snow.

Other than the hot air balloon, what I loved the most of course was the food. I don’t think I had a single mediocre meal in Turkey. I went to Emilia-Romagna region in Italy right after, and dare I say the food I had in Turkey was as good as the food in Italy. 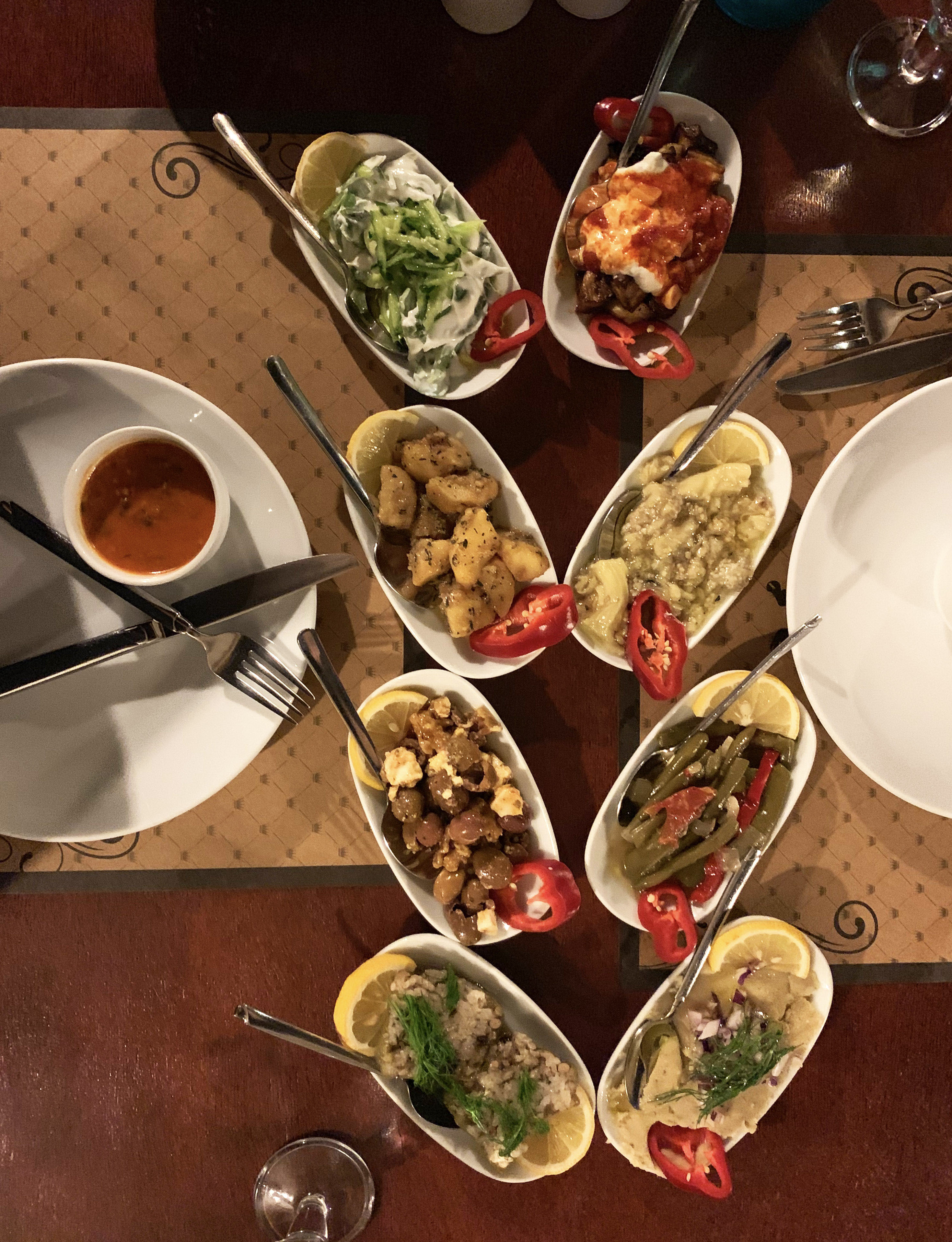 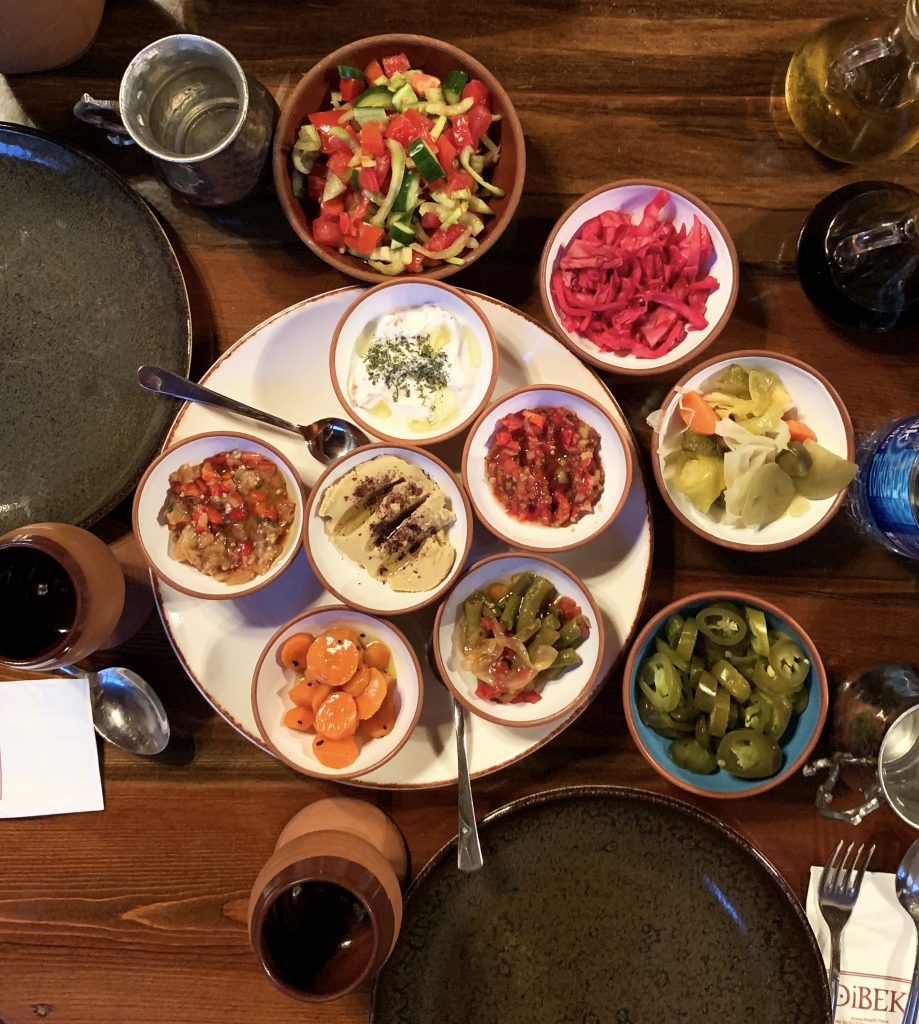 Two restaurants I highly recommend in Cappadocia are Ziggy café and Dibek. Ziggy has an elegant terrace with a view of Ürgüp, which is beautiful, but their Turkish meze tasting menu will make you forget all about the scenery and solely focus on eating 😊. Dibek is famous for their pottery kebab, which is an Anatolian speciality. The meat or mushroom is cooked in its own juice inside clay pot for hours. As you can imagine it is absolutely tender, juicy and delicious. Their meze starter is also outstanding. 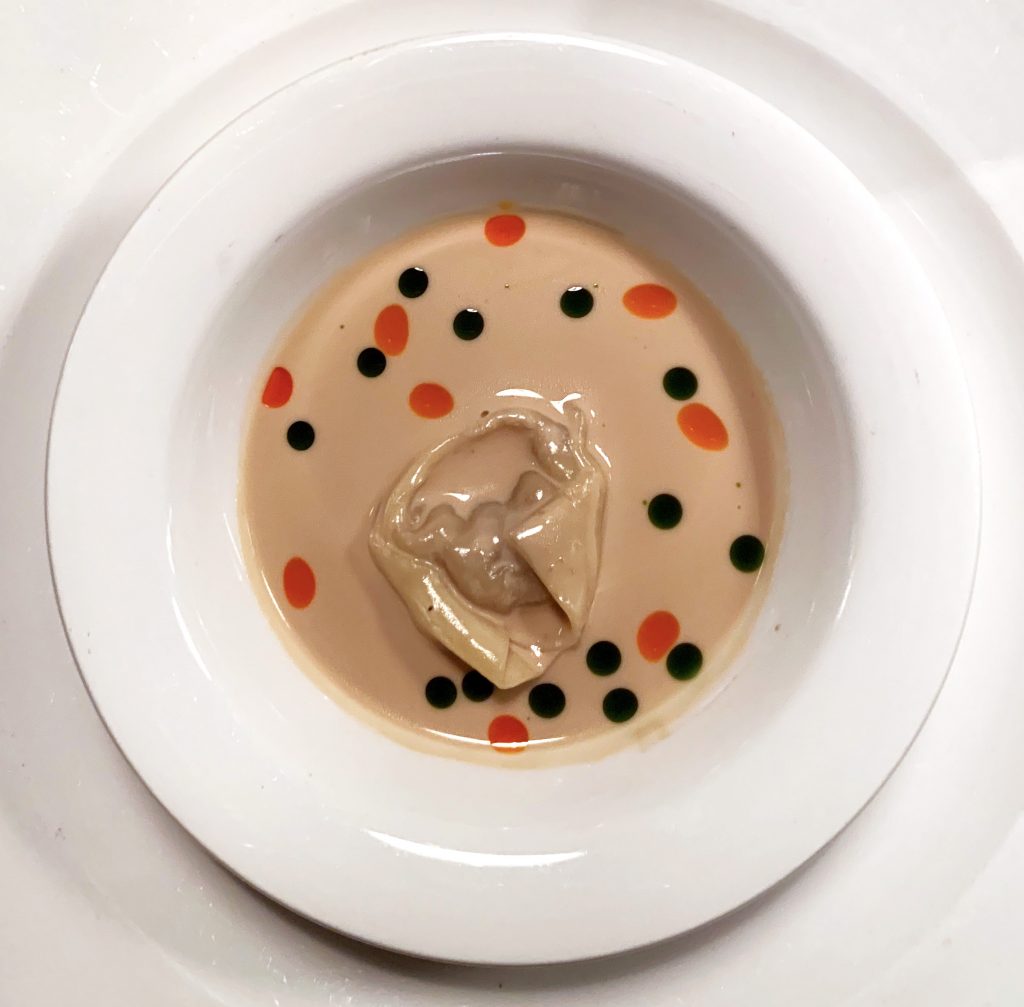 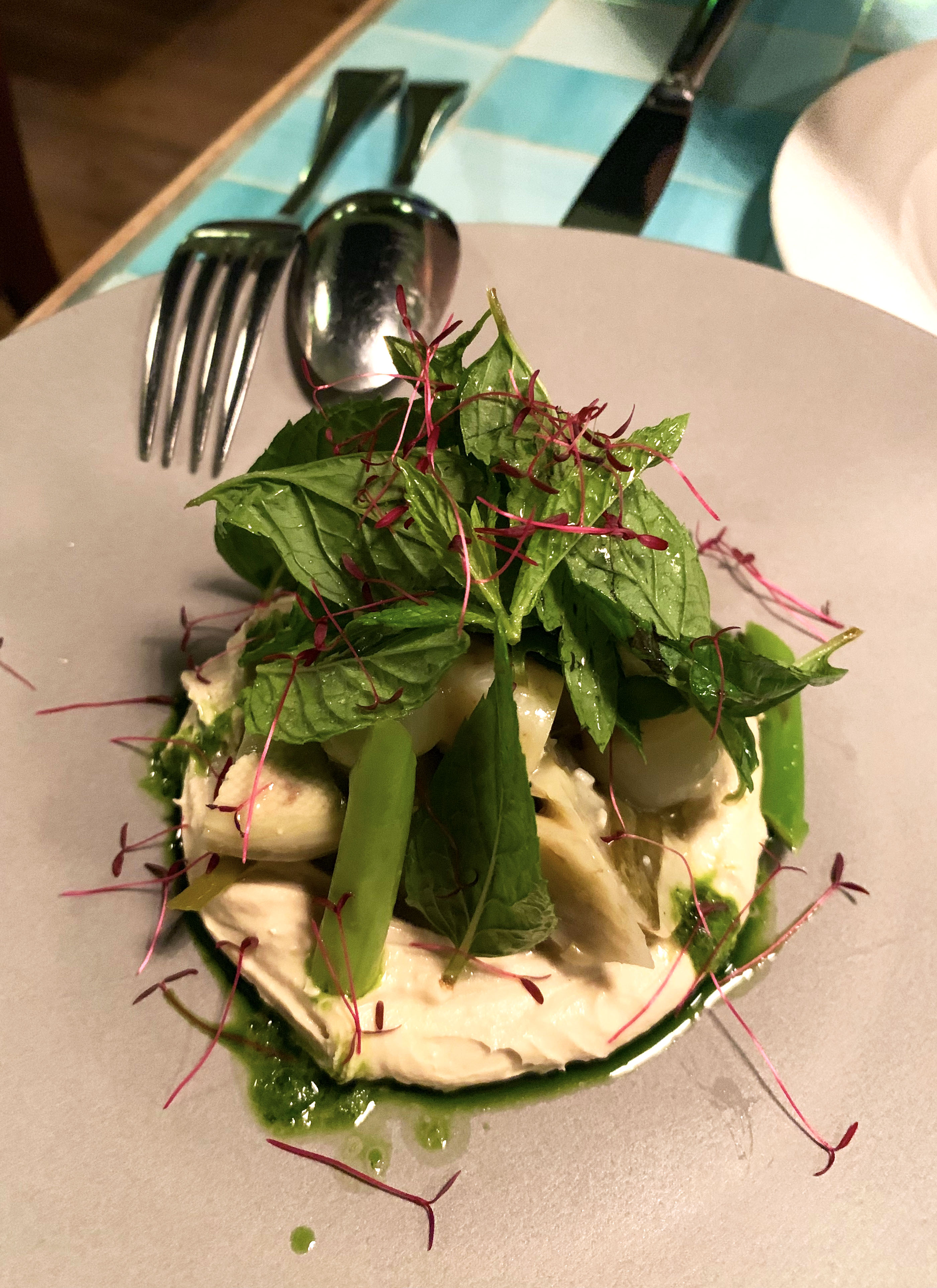 After spending 4 days in Cappadocia, I headed to Istanbul. As a cultural melting pot, the city has so much to offer in terms of places to eat, play and love. My husband and I stayed in Beyoğlu area, which has endless options of restaurants, bars and cafes. Yeni Lokanda was in less than 5 minutes walking distance from us and had an excellent Turkish/Mediterranean food with a modern take. 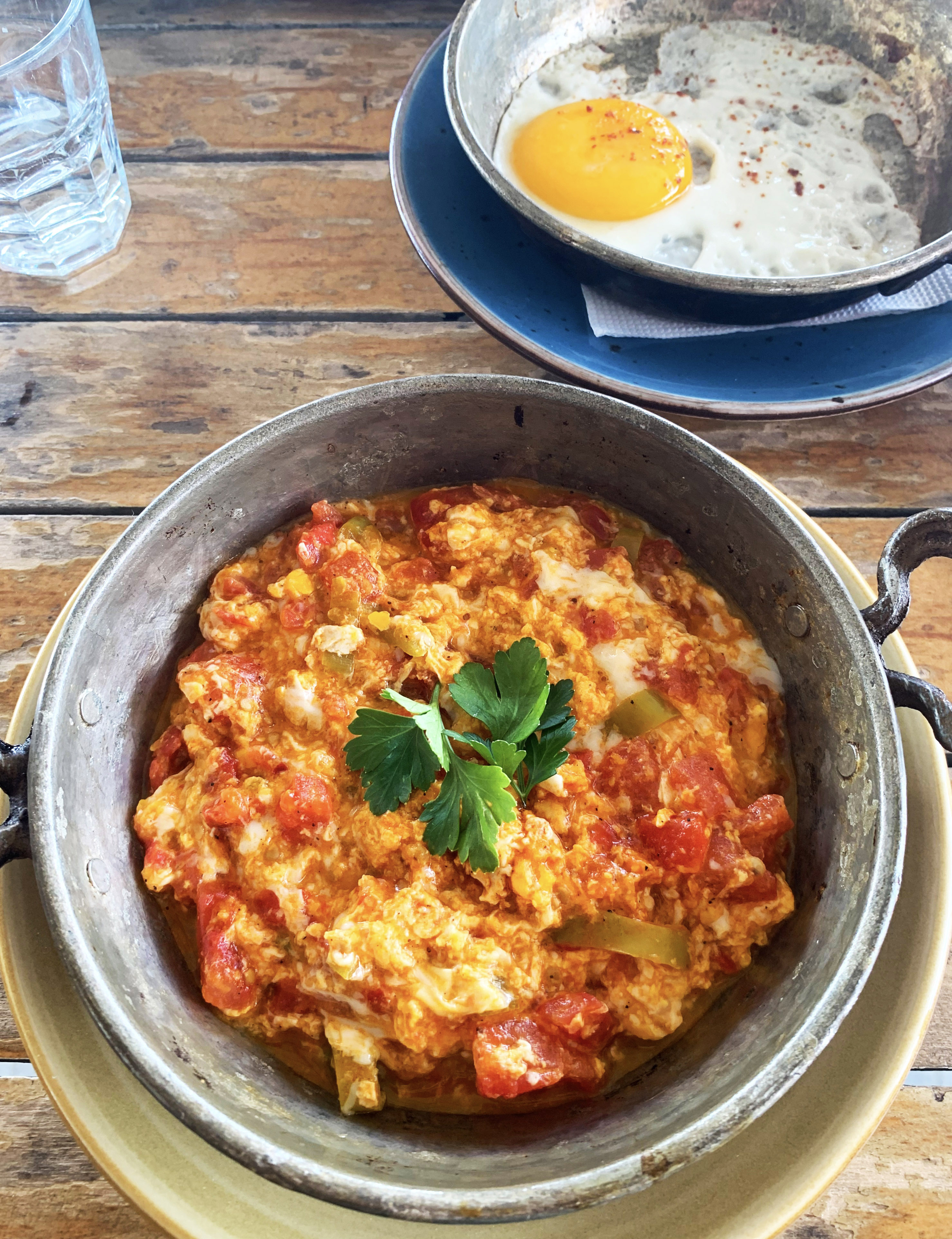 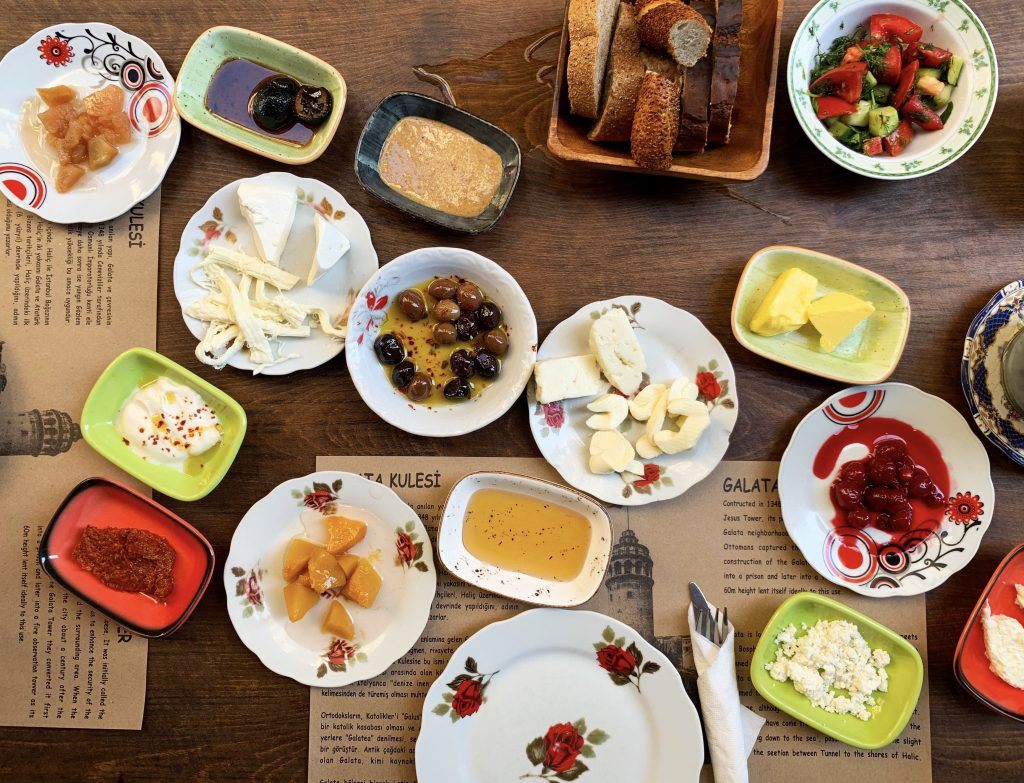 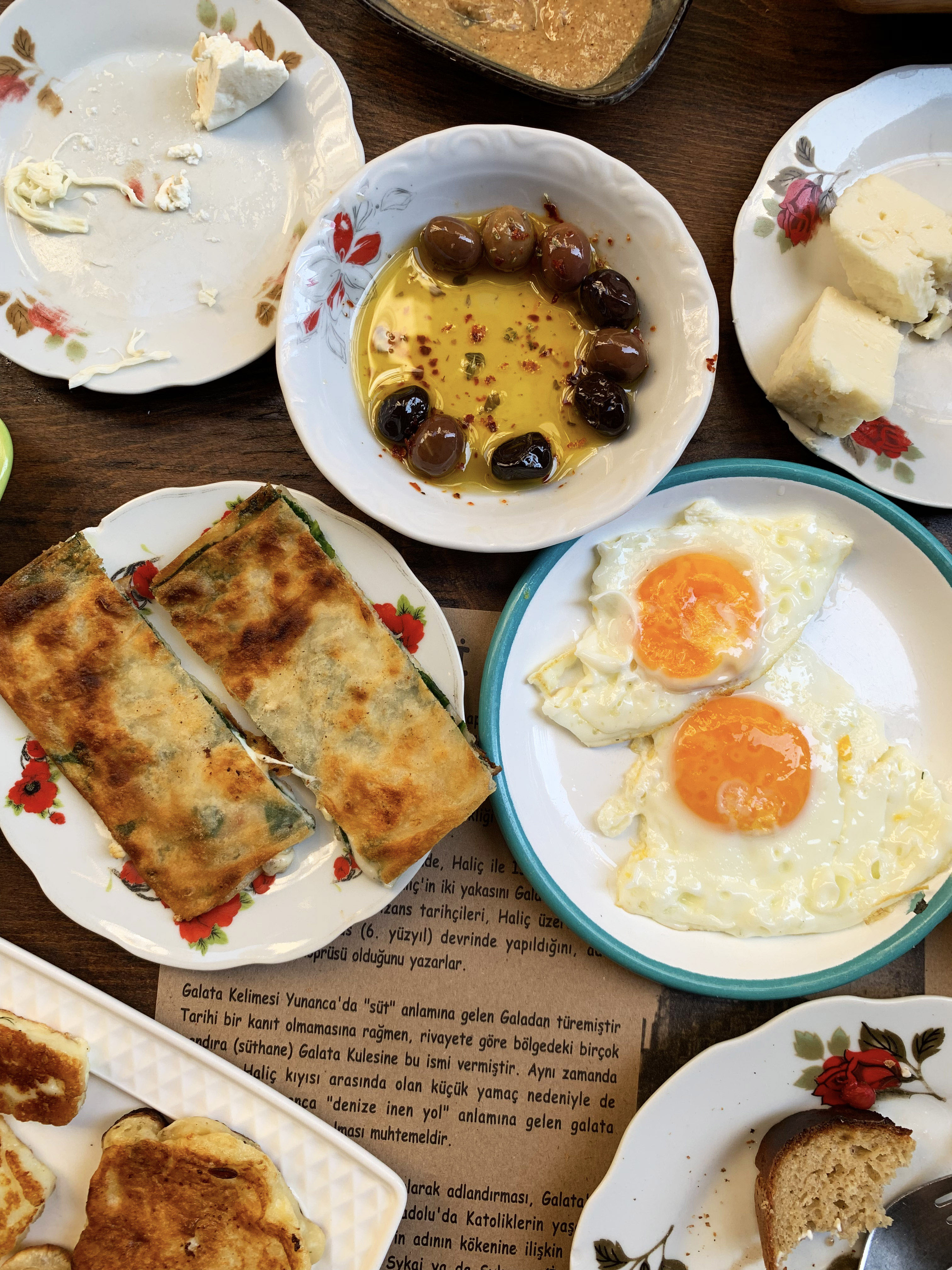 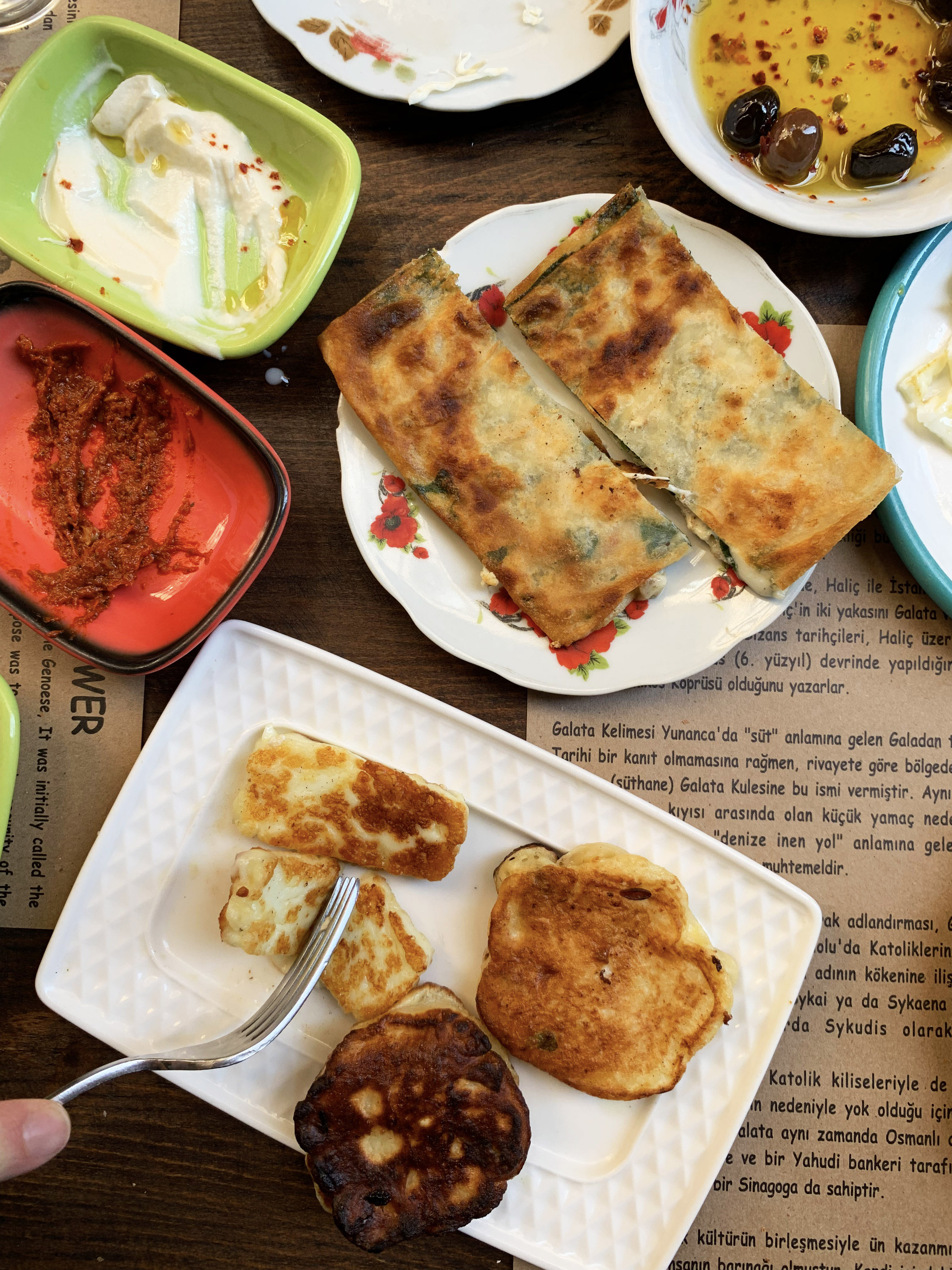 And we need to talk about the breakfast. Every meal in Istanbul was a delight, but the breakfast was just out of this world. Anything that is called “Turkish breakfast” we tried had one or more fresh cheese, breads, olives, cucumbers, tomatoes, herbs, honey and yogurt. And the village breakfast at Café Privato had savory and sweet pancakes, fried halloumi, red pepper dip, sweet sesame sauce, sweet and sour fruits and eggs in addition to that. This breakfast with a humble name is designed to overwhelm you with its volume at first then make you incredibly happy and satisfied in the end. This meal will pretty much set you up for the day, or make you take an early afternoon nap. 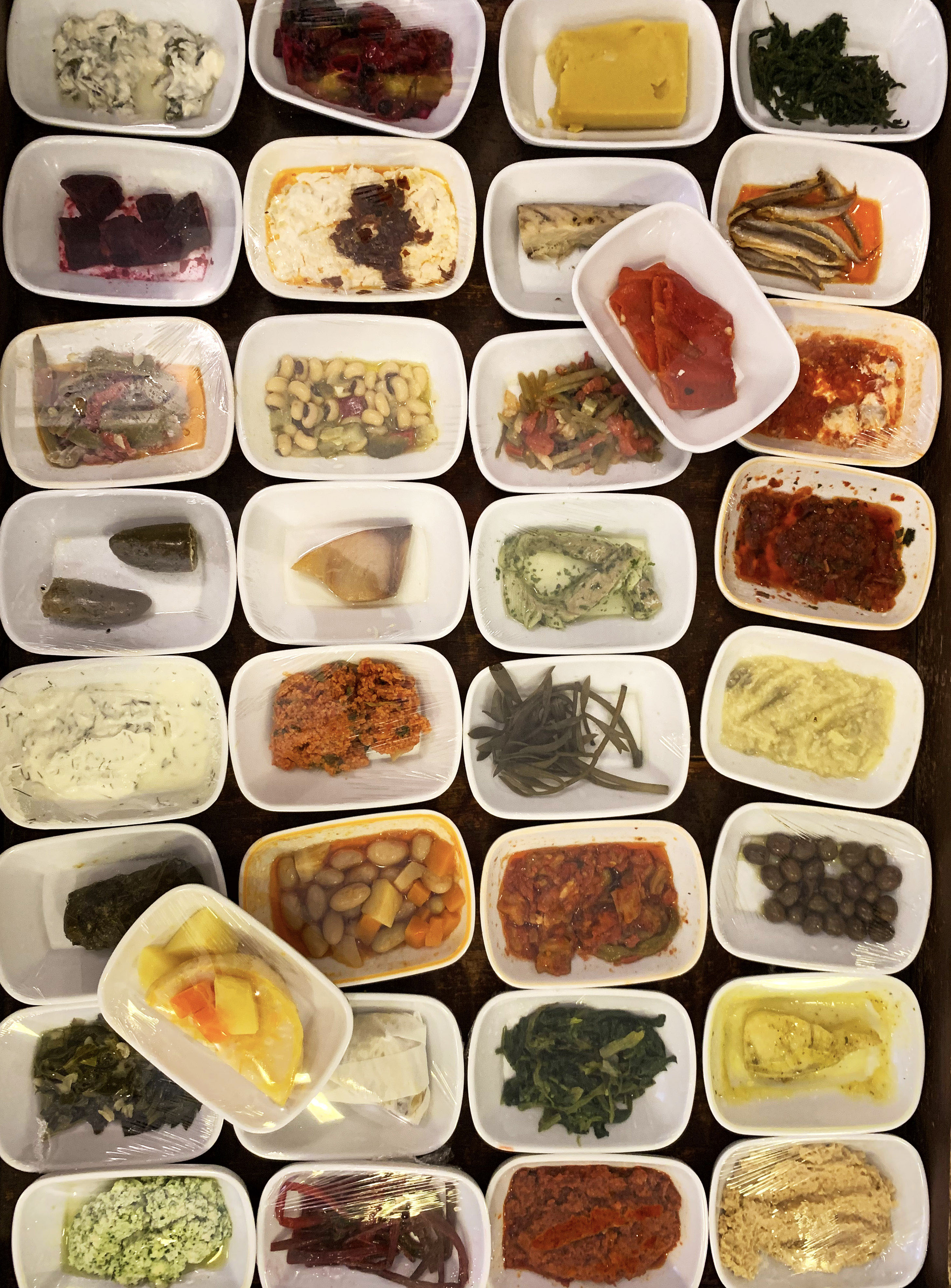 Traditional Turkish pickles made with salt and water only. They are milder than ones made with vinegar and highlight the natural flavor of ingredients. 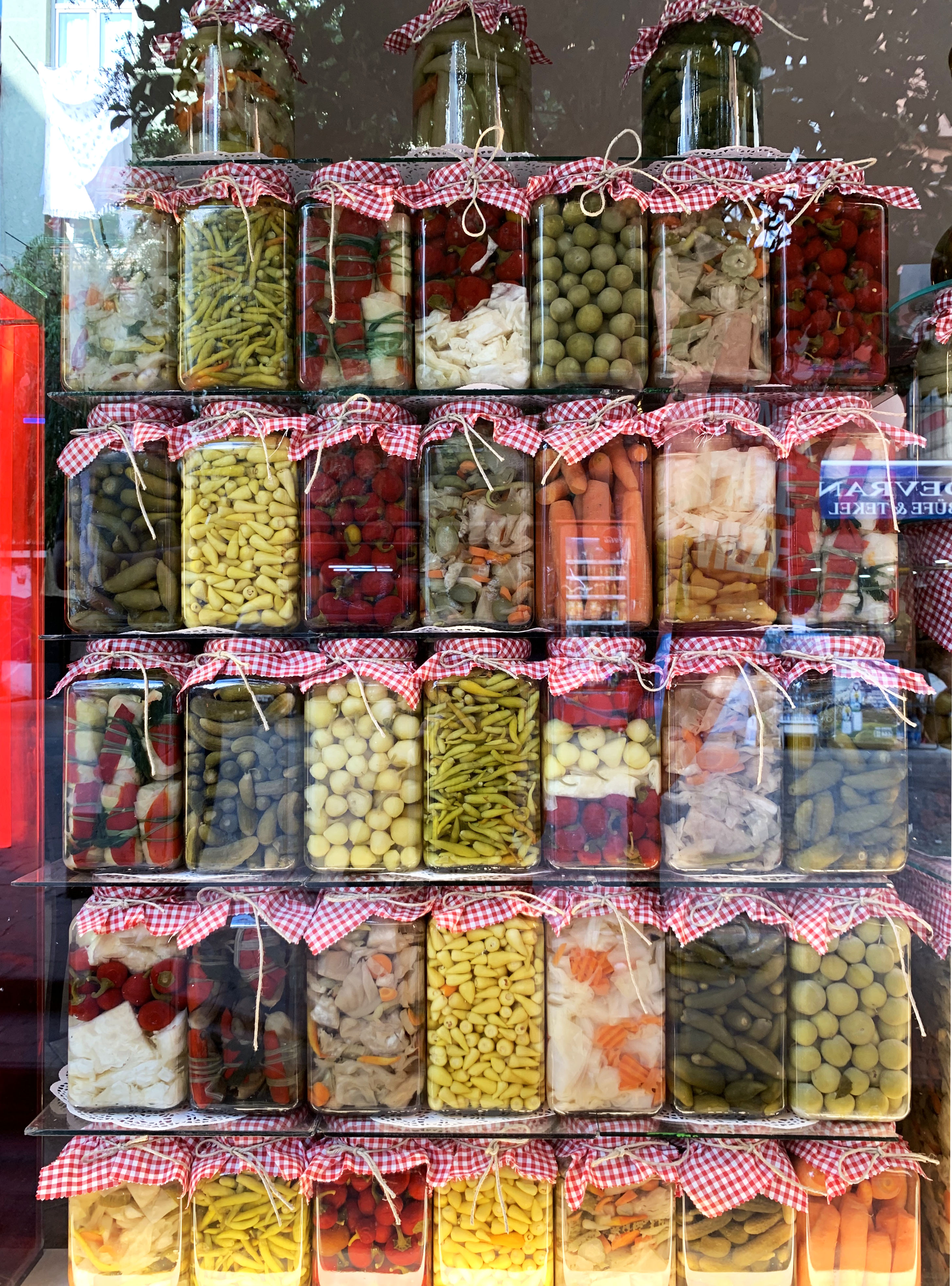 Pickle juice is a common hangover cure for Turkish people 😊 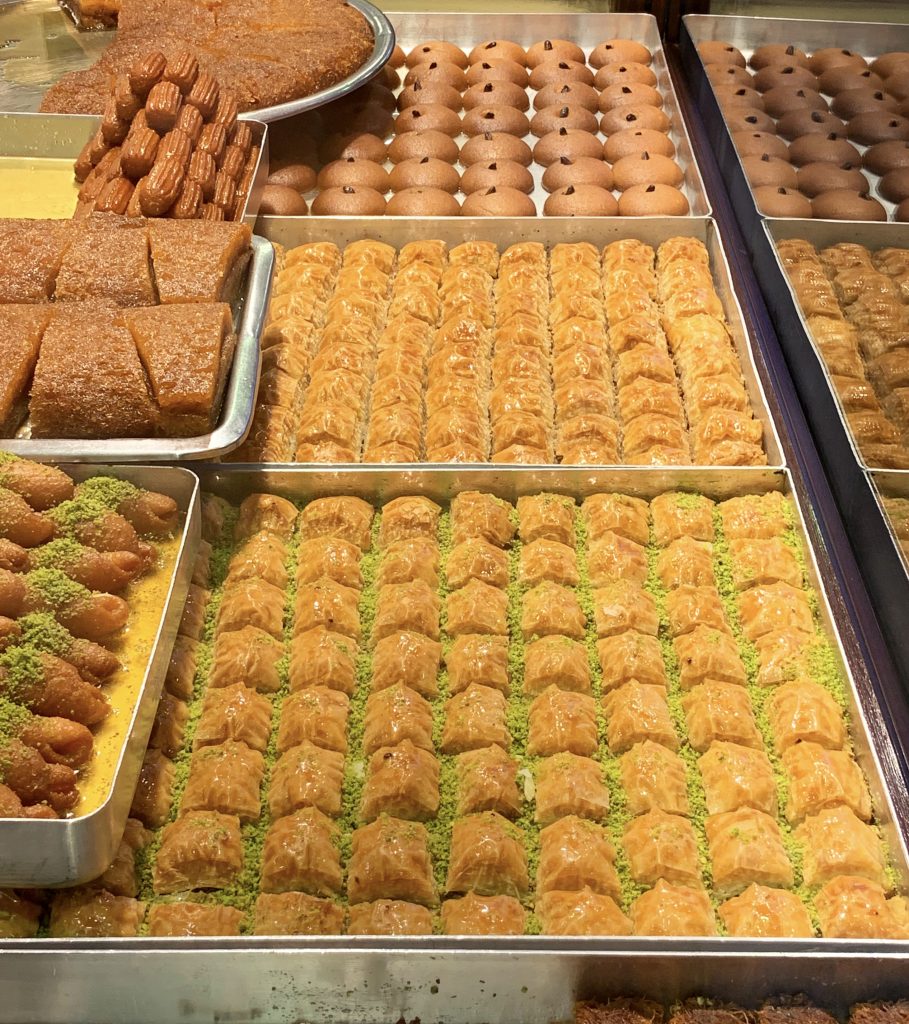 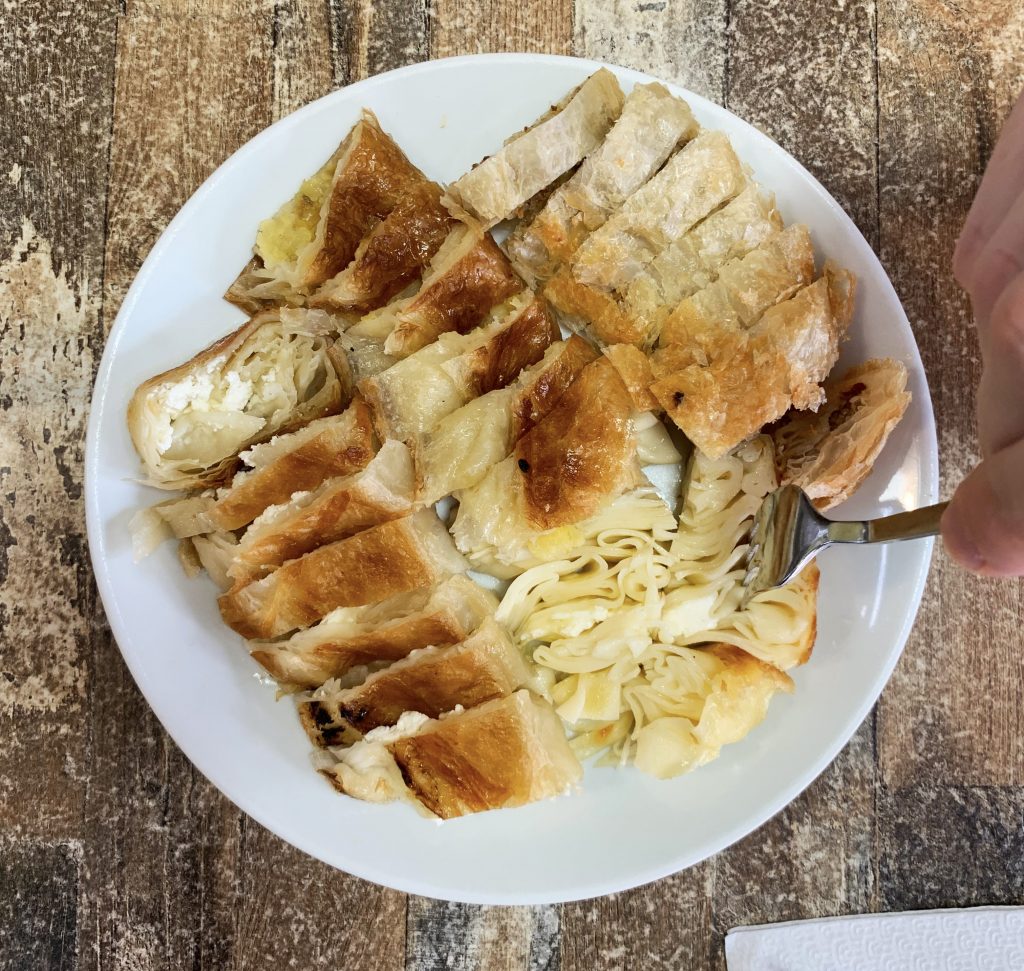 First time I tried a food tour by WITHLOCALS was in Lisbon last summer. And I had so much fun walking around and tasting everything. For a foodie like me, it is one of the best ways to get to know the city. So I decided to do it again in Istanbul. Our guide Aysgel was a friendly young pastry chef, who was knowledgeable and passionate about Turkish cuisine and the city. Everything we tired was unique and delicious but there are a few standouts. First one is Borek; pastry filled with meat, potato, cheese and noodle-like water pastry (pastry inside pastry 😊). It is mellow, delicate, and satisfying, the ultimate comfort food. 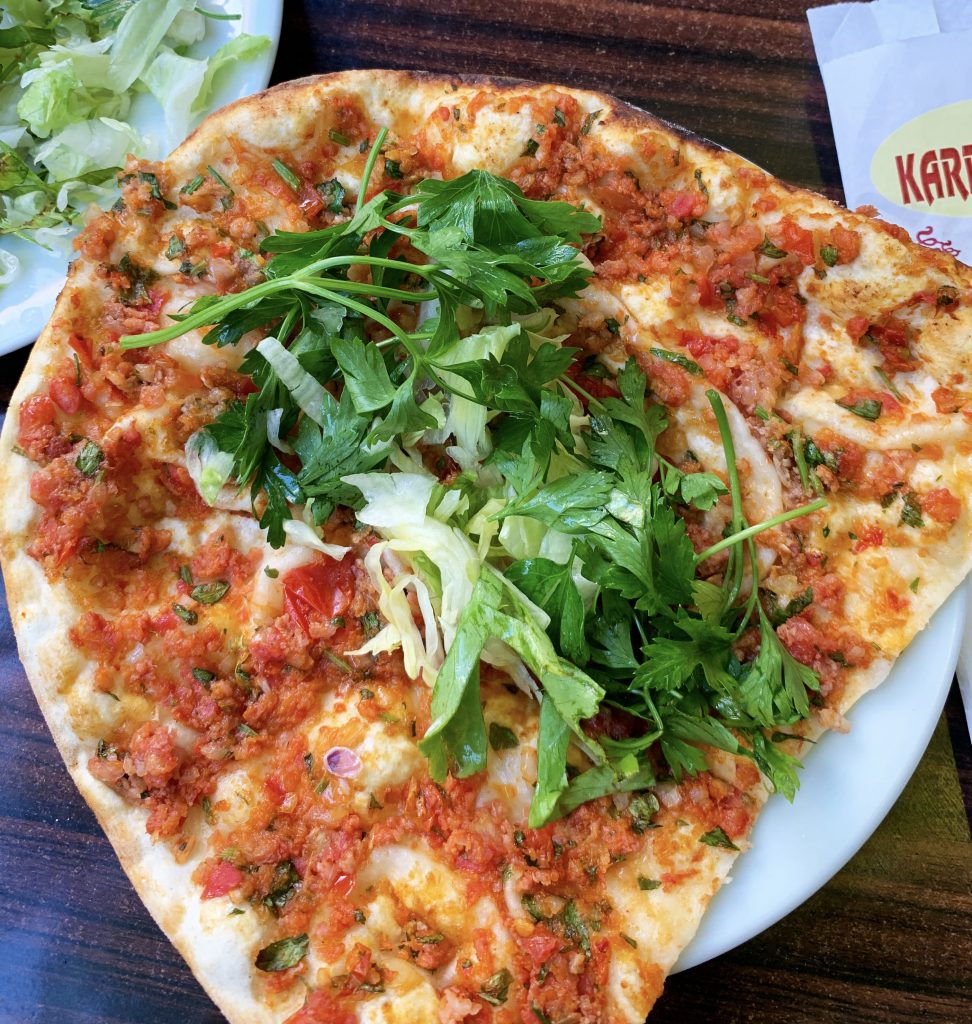 Lahmacun is often called Turkish pizza, a close related cousin of other Turkish pizza called Pide. It is a crispy flatbread with the topping of ground meats, tomatoes, peppers and herbs. Although it looks like a pizza, and I had always been eating it like a pizza, you are supposed to add a little fresh veggies and a squeeze of lemon and roll it before you put it in your mouth. I wish I had a video of me rolling Lahmacun, the bottom of the bread is so crispy, you could hear it when you roll. And the top is still moist, juicy and holds everything together. The first bite hits you with a every possible savoriness you could imagine. It is a heaven in your mouth.

Other dish with extremely crispy flatbread and tasty meat filling was Dürüm, which most people would call it a kebab. Our guide took us to a modest little corner restaurant called Durumzade, where late Anthony Bourdain frequently visited. I was, and still am a huge fan of his, so being able to eat at a place he used to love was quite special. And their kebab was the best I’d ever had.

Sunset from the terrace bar at Mikla 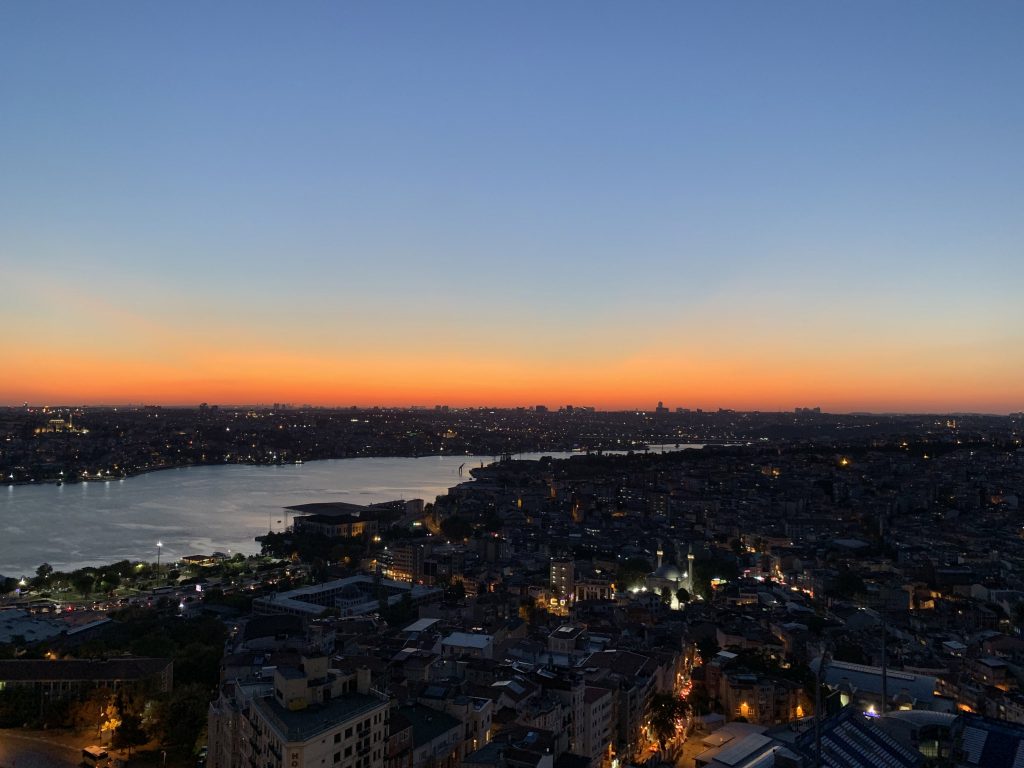 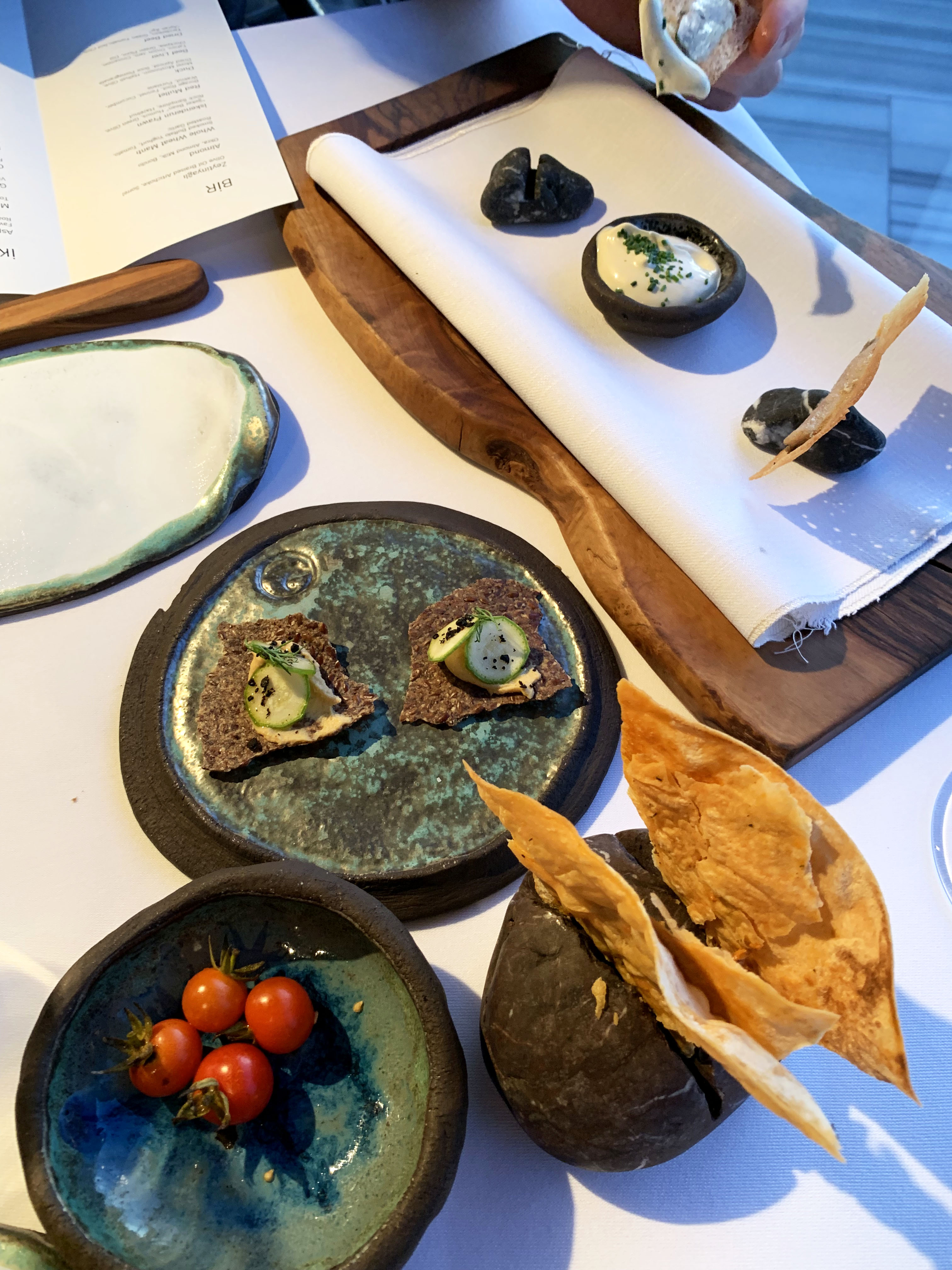 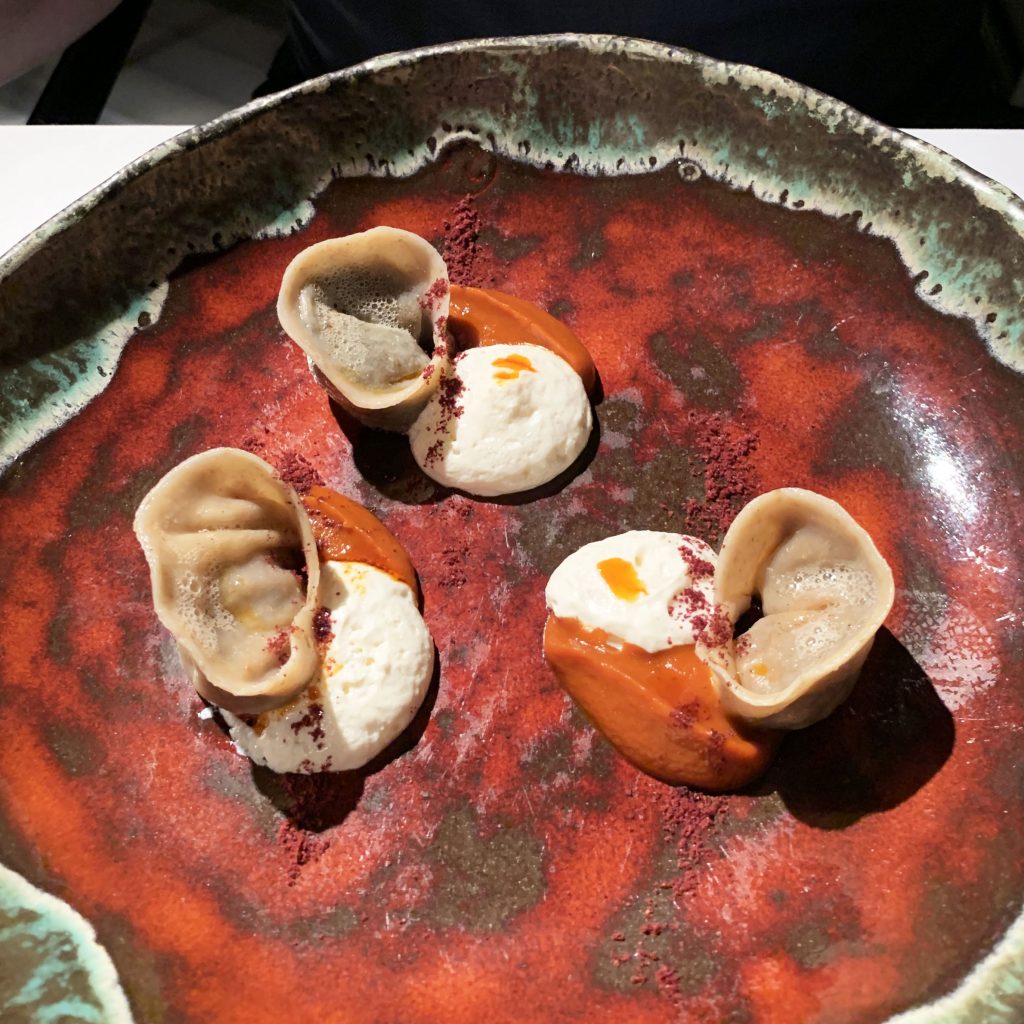 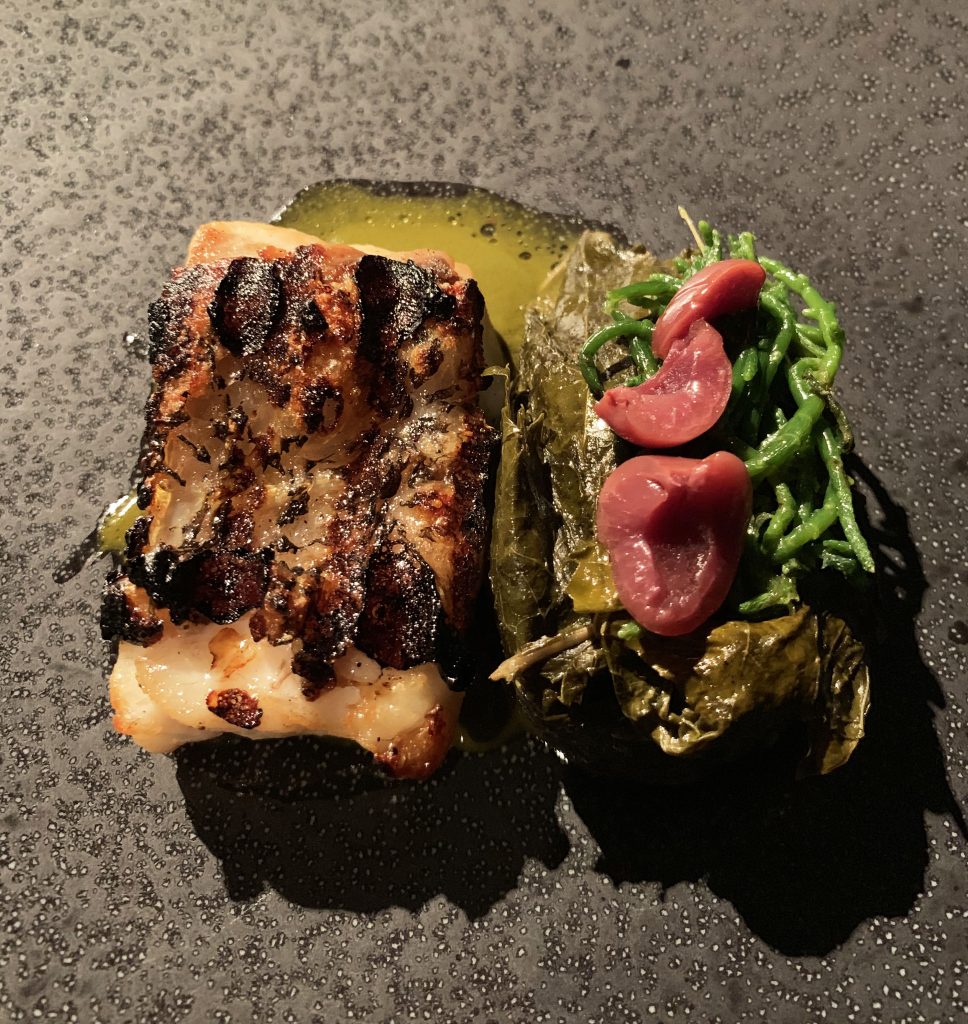 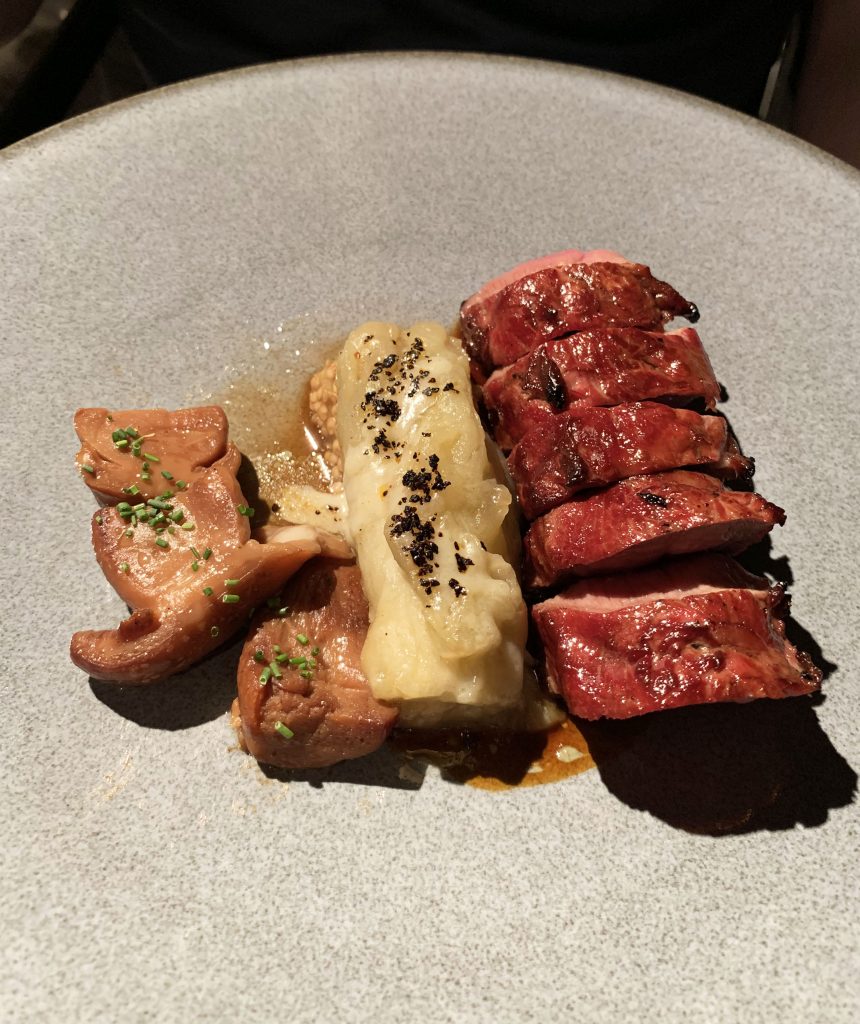 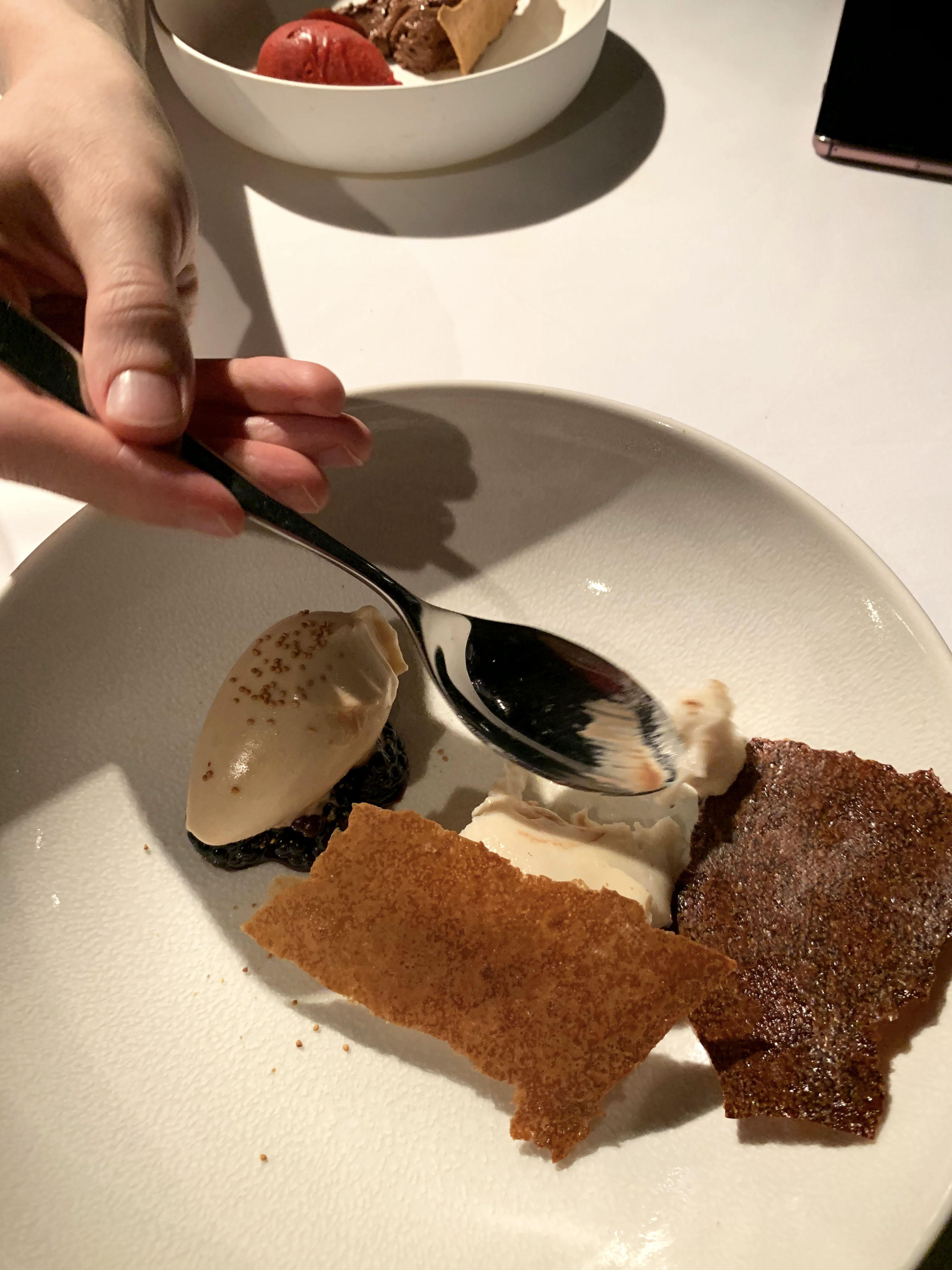 Mikla was a restaurant I had anticipated the most, as I heard it was ranked #44 on the list of “The world’s 50 best restaurants” n 2018. And I loved this restaurant. Even before you order, they spoil you with quite a few delicious amuse bouche. Their food is creative, full of fresh Turkish and Mediterranean flavors and beautifully presented without being too foofy. And their outdoor terrace has a world class view of Istanbul. Perfect place to watch the sunset before dinner.

If you read my caption above, you might be wondering what I meant by “sweet chicken” dessert. This isn’t just a figurative name, there is actual chicken meat in the pudding. It is their version of “Tavuk göğsü”, which is a Turkish milk pudding with shredded chicken breast. It sounds odd I know, but it is in fact quite delicious. First time we tried it without knowing what it was, my husband said it had the texture of milk pudding and the flavor of rice pudding. I think that’s a pretty accurate description of this dessert. There’s a very subtle hint of savouriness in this pudding, which balances its sweetness perfectly. According to wikipedia, it was one of the most famous delicacies served to the Ottoman sultans in the Topkapi Palace. 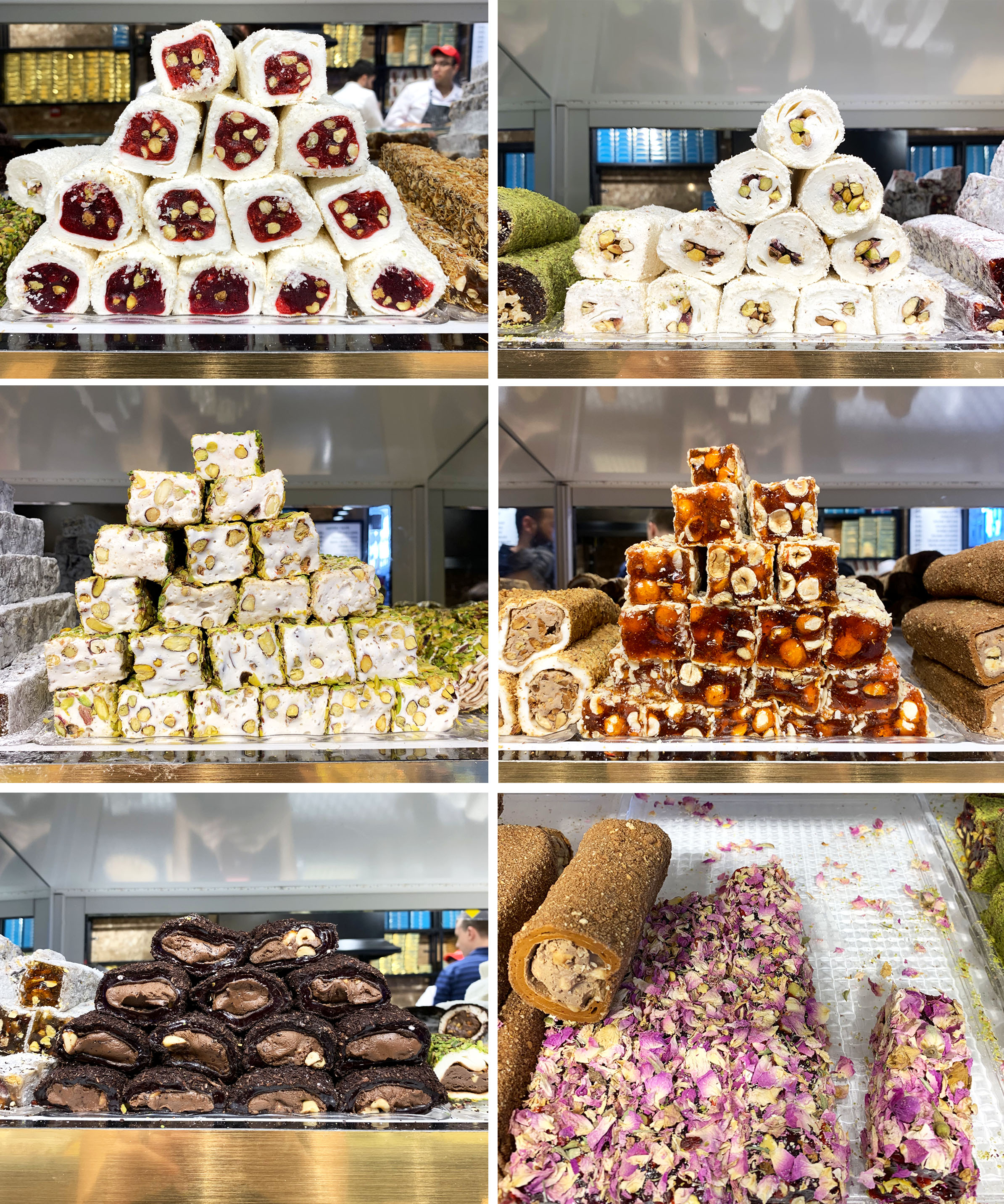 I have to say I had little to no enthusiasm over the Turkish delights. I remember trying them over an afternoon tea in London a while ago, and I was not impressed. To me, they were just a different version of jelly, which is probably my least favorite amongst all the sweets. But boy I was wrong. The real Turkish delights I tried in Istanbul were nothing like ones I had in the past. They are bursting with flavors, pillowy and delicate in texture and most importantly not sickly sweet. You can really taste the freshness of ingredients. And they are so beautiful to look at. I couldn’t help stopping and staring every time I passed by a Turkish delights store in the street. 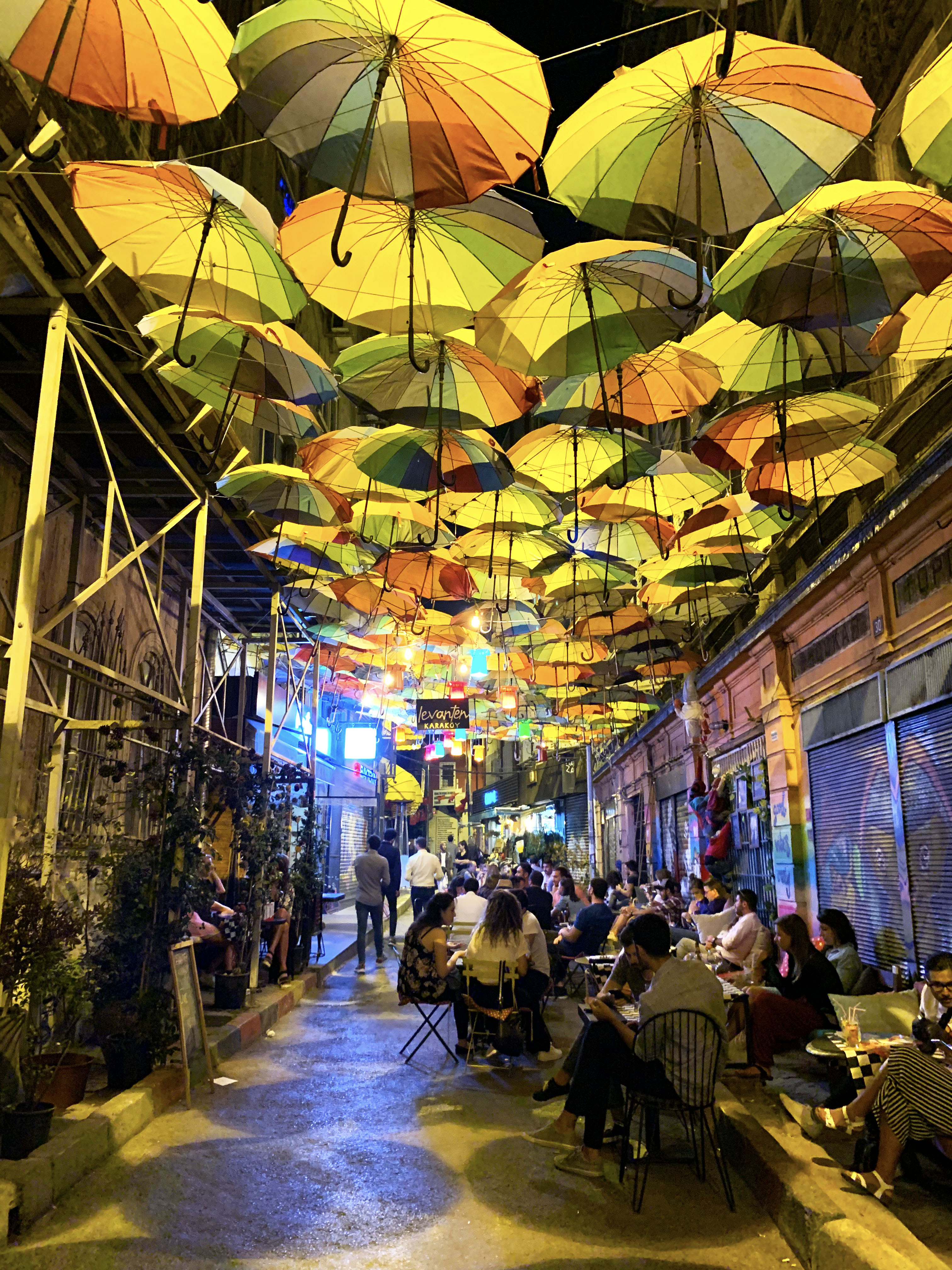 As much as I love being on a holiday, I tend to start missing home towards the end of my trip. But I was genuinely sad leaving Turkey, especially Istanbul. There’s so much more to explore in the city, I feel like I only scratched the surface this time. My husband and I say that we will be back to places we loved all the time, but we rarely end up doing it. However I have a feeling that we will be back in Turkey for real. If you haven’t been to this exotic and stunning country where the east and west truly meet, you should go start planing right now. I promise you won’t regret it.